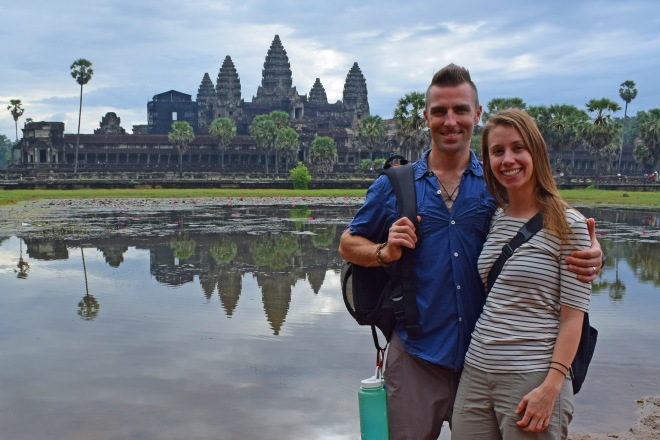 “Why Cambodia?” – We were asked this question multiple times before our trip. The short answer is that we wanted to visit Angkor Wat, the mysterious temple and mausoleum built by the Khmer King Suryavarman II from 1112 A.D. to 1152 A.D.

The long answer is that we wanted to go on an archaeological adventure to uncover the history of the forgotten Khmer Empire (802 A.D. to 1432 A.D.) and the monumental temples they left behind. As we researched Cambodia before the trip, we couldn’t believe we knew so little about the rich history of the Khmer Empire and that modern Southeast Asia owes much of its development to the Khmers.

At its height, the Khmer Empire covered modern day Cambodia, and much of Thailand, Laos and Vietnam. The Khmer were master builders, capable of taming the jungle and corralling the mighty rivers into vast irrigation systems. They constructed magnificent highway networks and impressive religious structures in honor of their deities. The Khmers, in essence, formed the Roman Empire of their time.

The Angkor temples and the people who built them fascinated us and sparked our desire to explore the ruins of this great civilization.

On our first morning in Siem Reap, the city adjacent to Angkor Wat, we awoke long before sunrise thanks to severe jetlag. We decided to take advantage of the early hour and begin our exploration of the temples by witnessing sunrise over Angkor Wat. We left the hotel and immediately hailed a tuk-tuk driver, despite the early hour, who agreed to drive us around for the day. As we rushed through the dark streets, accosted by mingling scents of heady jungle and dense air pollution, we couldn’t help but be intoxicated with anticipation of the archaeological wonders that awaited us.

We arrived at Angkor Wat and joined hordes of tourists stumbling through the pre-dawn inky blackness. We waited, cameras poised, for the sun to rise above the temple. As the sky lightened to a pale pink hue, we were finally able to make out the magnificent complex around us. The remnants of the Khmer Empire seen up close were more impressive than we could have imagined.

Huge towers rose above the temple, drawing the eye skyward over impossibly steep stairs with no hand railings to be found. Our shoulders brushed the walls as we ducked beneath arches that were built by stacking stone blocks closer and closer together until they met in the middle. The great Khmer architects had not discovered the structural advantages of a keystone at the top of the arch, which made their construction feats all the more impressive. Intricate statues and bas-relief stone carvings decorated the temple depicting famous battles and religious stories revered throughout the Khmer Empire. A large, perfectly square, man-made canal surrounded the temple, adding to the mystery of how these structures could have been built within such thick jungle centuries before the dawn of modern industrialization.

Next, we visited Bayon, a mysterious temple at the heart of Angkor Thom decorated with over two hundred giant faces, all closely resembling the king who commissioned the temple.

Our final stop was Ta Prohm, the famous “Tomb Raider” temple that appears to have been swallowed by the jungle. Enormous trees shoot toward the sky, their roots crushing the temple walls. The beauty here served as a blunt reminder of the power of nature. Not even formidable stone temples, marvels of engineering at the time of their construction, could withstand the jungle’s encroachment over the centuries.

Our trip was in November, just on the cusp of monsoon season, and boy, was it hot! The temperatures hovered around 100°F and the sky remained stubbornly cloudless. The stifling humidity had us sweating through our tee shirts in minutes. We were hot and sticky, but thrilled to be exploring such exotic temples, half forgotten and reclaimed by the jungle.

It quickly dawned on us that Cambodia’s climate was not conducive to a non-stop itinerary. Built-in rest between sight-seeing was necessary here.

By mid-afternoon of our first day at the Angkor complex, we were exhausted. We asked our tuk-tuk driver to bring us back to the hotel where we lounged the afternoon away by the pool sipping ice cold mojitos. Life was blissful.

That evening, after the temperature dropped considerably, we jumped into another tuk-tuk and swerved in and out of traffic until we reached the downtown. Siem Reap’s center is relatively compact, with many restaurants and markets within walking distance of the Siem Reap River. We selected a small restaurant serving traditional Cambodian cuisine, mostly flavorful, curry-based soups with rice, vegetables, and either chicken or fish. Our table had a lovely view of the bustling street, where vendors and tourists alike provided us with free entertainment. The highlight of the evening was observing tourists’ reactions to the trays of scorpions, snakes, and tarantulas on a stick for sale as delectable snacks. Locals do in fact eat these delicacies, but we were not brave enough to try them. 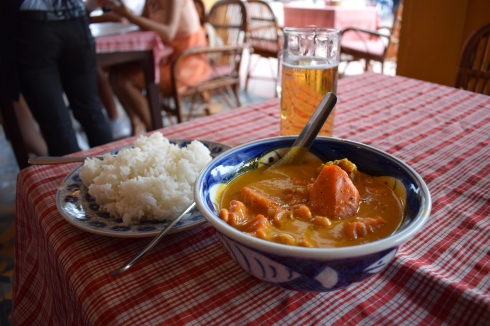 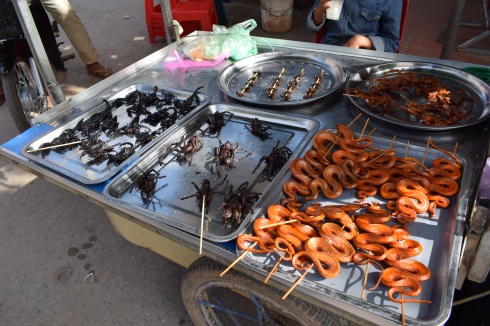 After dinner we meandered through the local market, browsing stalls piled high with colorful produce and bargaining with shrewd business owners for souvenirs. The pungent smell of freshly gutted fish permeated the enclosed space. Back out on the street, the nightlife of Siem Reap picked up after dark. Night clubs blared their music over the constant din of cars, tuk-tuks, and motorbikes on the streets below.

On our second and third days, we repeated the pattern of the first day’s adventuring: sightseeing in the early morning, relaxing by the pool in the heat of the afternoon, and dinner out on the town.

The second morning of exploring consisted of the “big” loop temples: Preah Khan, Neak Pean, Ta Som, East Mebon and Pre Rup. These temples were more impressive than Angkor Wat and Angkor Thom in the sense that they were more rugged and wild, with less of a manicured feel than the those on the main tourist track. We felt as though we were part of Henri Mouhot’s team in 1860 “discovering” these ruins for the first time in modern history.

Archaeologists still battle the jungle today to keep it from overgrowing the excavated stone. Much of the Angkor complex has yet to be uncovered due to limited resources which must be divided between holding the jungle at bay in the excavated temples and uncovering new ones.

At the lake’s outskirts, we boarded a large boat which deftly navigated the swamps to reach the area’s famed floating villages. From here we jumped on a small canoe piloted by a local guide. Time slowed as our canoe drifted out over the water. The shade of the freshwater mangrove trees cooled the air, bringing a stillness of contentment and peace.

It was not difficult to imagine why the Khmer ruled their empire from this lush, abundant region. We loved it here too.

Our takeaway from our time in Cambodia: It is rare in the world of tourism to feel like you are discovering something for the first time. That sense of excitement at discovery and the yearning to uncover the mystery before you are gifts that Cambodia has remarkably preserved.